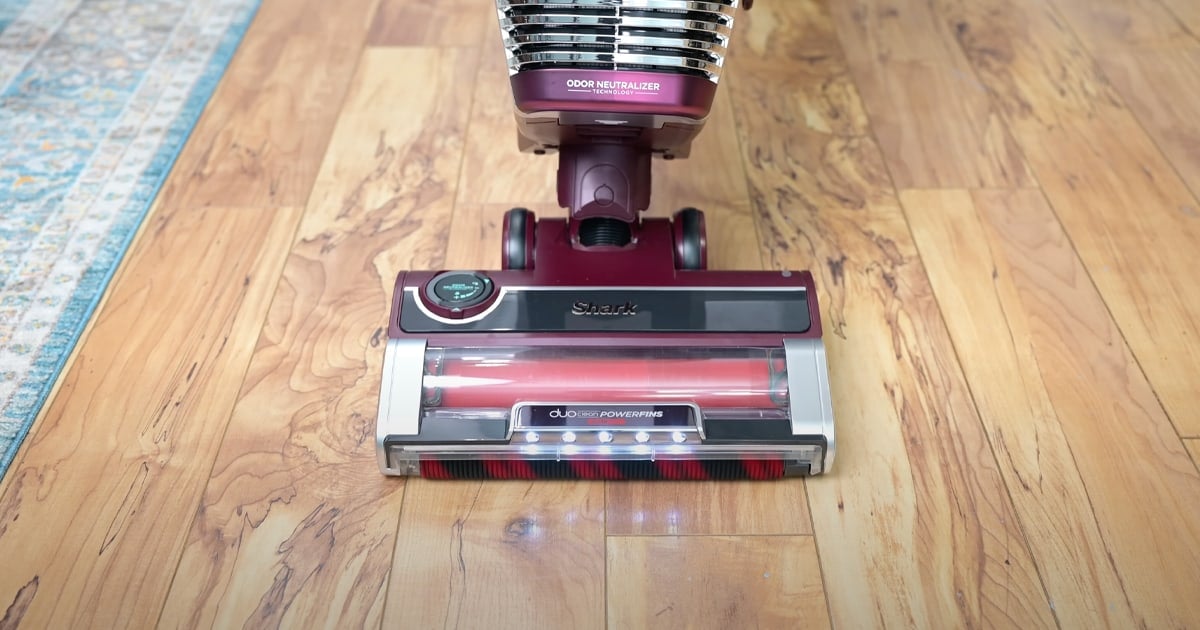 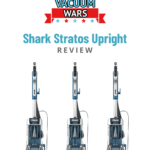 When it comes to vacuums, Shark upright models regularly find themselves turning in extremely competitive test scores. So, when Shark released their latest flagship upright, the Shark Stratos, we were eager to put it through its paces. In this review we share our findings.

One thing that was hard to ignore when we unboxed the Shark Stratos was the following claim: “Strongest suction & best hair pickup of any vacuum.” That’s a big statement, and we’ll cover it further below when we talk about performance.

After removing the Shark Stratos Upright, hose and accessories the next step is clicking together the main vacuum. If you’ve owned a previous Shark upright model, such as the Navigator, Rotator or Vertex, you’ll remember the experience. It only takes a few minutes and the included manual makes it simple, even for a first timer.

Prefer a cordless? Check out our Shark Stratos Cordless review!

Where vacuums and performance intersect we often lead with how a vacuum fares at picking up various debris, from small to large, on different surfaces. In the case of the Stratos, we’re going to instead start by covering its suction power.

As we mentioned earlier, Shark isn’t shy about touting the Stratos’ suction. And, we were curious how those claims would measure up. We do a variety of tests that measure airflow and suction, both sealed and unsealed, at various parts of upright vacuums we test.

And, we can confirm that the Shark Stratos does have a ton of suction at the hose, wand and head. After running it through all our tests, there’s no question that the Shark Stratos Upright is one of the most powerful vacuums we’ve ever tested. Compared with the all uprights in this round of testing, the Stratos yielded suction and airflow numbers far beyond average.

We compared the Stratos with the last flagship upright from Shark, the Vertex AZ2002. And, to its credit, the Vertex more than held its own. That comparison showed that the Stratos and Vertex had almost identical suction and airflow results.

But, as our tests continued, we did find that the Stratos outperformed the Vertex in our deep cleaning tests.

This may be due to the evolution of Shark’s DuoClean brushroll system. Regardless, the Shark Stratos upright is the best Shark DuoClean upright Vacuum Wars has tested on carpet to-date.

This is also a nod to the Shark Vertex, though, especially as we’ve seen it being sold at considerably discounted prices lately.

For those not familiar with DuoClean, it’s Shark’s patented brushroll system which combines a soft roller brush and a more traditional brushroll in a single floor nozzle.

Soft roller brushes shine on hard flooring surfaces. Traditional brushrolls which are plastic or rubber fins are best suited for coaxing dirt and debris out of carpet fibers. By incorporating them both, DuoClean-equipped vacuums like the Stratos get the best of both worlds.

In addition to cleaning the Stratos Upright’s filters and performing other routing maintenance, we recommend you remove soft roller head periodically and clean out any dirt and debris that may be lodged behind it.

The brushroll is easy to remove, and keeping this area clean will help keep suction levels at a maximum.

Unsurprisingly, the Shark Stratos upright passed every pickup test we put it through. In short, as far as vacuuming debris of any size on both hard floors and carpet is concerned, it doesn’t get any better than this.

Finally, another suction-intensive test where the Stratos performed extremely well was in our crevice pickup test.

One of the newer technologies in vacuums is active hair removal. In the case of the Stratos upright, Shark calls it a Self-Cleaning Brushroll. They explain the technology as providing “powerful pet hair pickup, with no hair wrap.”

And, we found this to be another area where the Shark Stratos outperforms its peers. We tested it by vacuuming up 7″ and 14″ human hair and didn’t find a single strand tangled on the its brushroll.

In covering the Shark Stratos Upright cleaning performance we’ve already covered many of it features, but not all of them. Here are a few others worth factoring into consideration.

Another feature that the Stratos upright includes is Shark’s Anti-Allergen Complete Seal. It combines a well sealed system vacuum body and connections with HEPA filtration to, per Shark, “capture 99.9% of dust, allergens, dander and more” for particulates “down to .3 microns” in size.

We’ve talked about the benefits of a well-sealed system in our videos in the past. Once vacuumed, cheaper vacuums often leak dust and finer particles back into the area they were just removed from. But, many premium vacuums, including the Stratos and a few other Shark uprights have solved the problem.

Shark’s Powered Lift-Away makes cleaning hard to reach areas easier by transforming the Stratos upright into a portable canister vacuum. With the press of a button, the main vacuum assembly and hose detach from the full-size cleaning head and tube.

With the vacuuming hose still attached to the tube and full-size cleaning head the Shark Stratos Upright can be used like a stick vacuum. It makes the vacuum far more flexible than an upright with a fixed configuration.

This configuration can be used with the included non-powered accessories. Some Shark packages also include a HairPro Self-Cleaning Pet Power Brush, also compatible with Powered Lift-Away.

A new feature just introduced by Shark, Odor Neutralizer Technology was designed to do precisely what it says. The technology leverages an odor neutralizing pod which is placed in an opening at the base of the main powered nozzle.

Shark says it “guards against bad odors in the vacuum, leaving you with a fresh-smelling home.” There is also an odor neutralizer technology intensity dial to adjust how much air flows through the cartridge.

After running it through all our tests, there’s no question that the Shark Stratos Upright is one of the most powerful vacuums we’ve ever tested.

We did try it out, but were ultimately skeptical. We couldn’t smell a difference, but as this is a neturalizer, we didn’t think we would. But, the main reason we didn’t warm up to this features it that for us it felt like one more thing to maintain. In the Shark Stratos’ manual it recommended replacing the cartridge every 6 months.

To be fair, this is merely our reaction and will likely vary from customer to customer. One final note is that it is not required – the Stratos works just fine without a cartridge in place.

Heavier upright vacuums can get a bit unwieldy. But, although we do consider it to be on the heavier side, the Stratos is lighter than many competing uprights. And, it has a very precise swivel motion which makes it easy to navigate in tight spaces and around obstacles.

Beyond vacuuming, we’re fans of the usability and design of the Stratos’ dirt bin, too. Not only is it a good sized one at 1.4 liters or just under 1.5 qts, but it is easy to both empty and clean, too.

The Shark Stratos Upright is at the razor’s edge of upright vacuum technology, has tremendous power, and is approaching perfection with its pickup on both hard floors and carpeting.

It’s versatility is important. The high suction and sturdy hardware mean it can be used for industrial things, like car vacuuming as well.

While that does come at a price, with all things considered, the Shark Stratos Upright offers a great deal of value. It does carry a high price tag, but it is still lower than many of its peers.

The Shark Stratos Upright is one of the best upright vacuums we have tested to-date. It excels on all flooring surfaces, has excellent suction power and performed very well in all of our cleaning tests.

We recommend the Shark Stratos Upright for anyone looking for a premium upright vacuum.

The Shark Stratos Upright is at the razor’s edge of upright vacuum technology, has tremendous power, and is approaching perfection with its pickup on both hard floors and carpeting.

We recommend the Shark Stratos Upright for anyone looking for a premium upright vacuum.

The Shark Stratos upright is available online, including at the retailer(s) below.