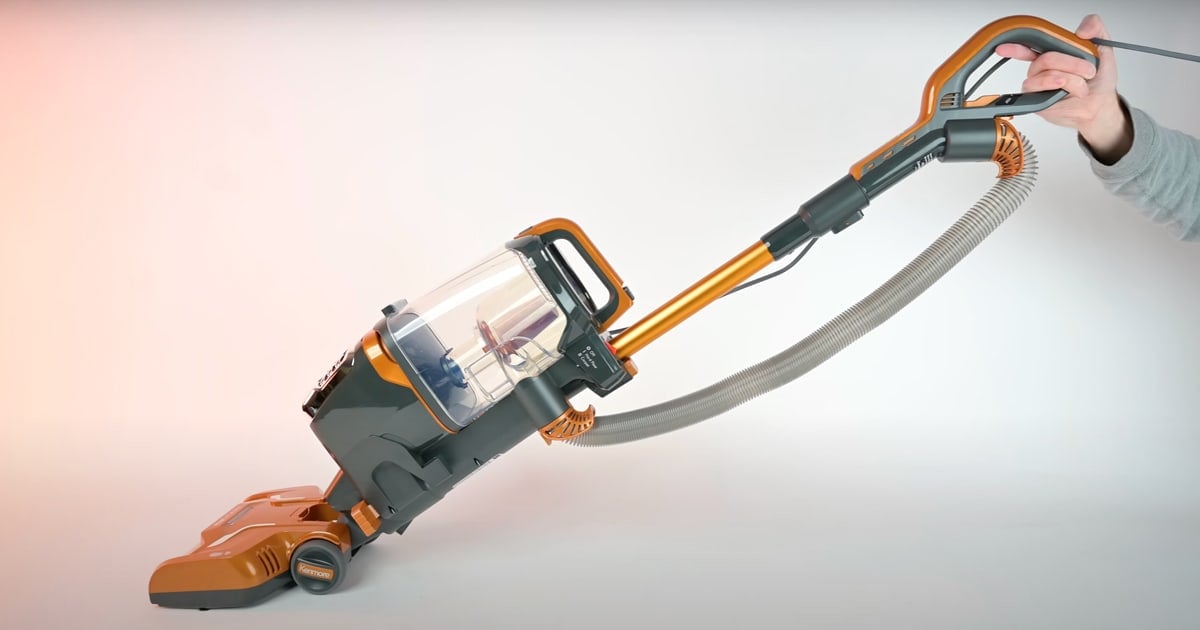 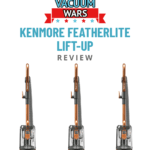 Here’s a quick spoiler: We really like this vacuum a lot. In fact, if we did a “Best Upright Vacuum Round-up” the week our FeatherLite Lift-Up arrived, we’re confident it would have won the best budget upright category.

Here are the specs on the FeatherLite Lift-Up DU4080 we bought and tested.

Taking the Kenmore FeatherLite Lift-Up out of the box gave us a pretty good idea of where part of its name came from. This vacuum is very light. In fact, it weighs in at a mere 12 pounds. For comparison, although a premium model with every bell and whistle, the Shark Stratos Upright weighed in at nearly 17 pounds.

Assembly is required, but it isn’t difficult at all. Going from box to ready-to-use involves first connecting the handle and tube to the main vacuum body. Next, the flexible hose is clicked into place. Finally, the two accessories that ship with the FeatherLite Lift-Up are added onboard the upright for quick access.

We put the Kenmore upright through the same cleaning tests as dozens of uprights we’ve tested and reviewed.

Shopping for a budget-priced upright? Don’t miss our review of the Bissell CleanView Swivel Pet upright!

One of the most impressive aspects of testing the FeatherLite Lift-Up was its ability to pick up debris on both hard floors and carpets. Looking at the cleaning head design, it has rather large openings, or gates, on the bottom of the floor head.

These gates make it really effective at picking up a wide range of sizes of debris. In fact, with our new scoring system, where we judge how well vacuums pick up different sizes of debris, the Kenmore FeatherLite Lift-Up scored the highest of any vacuum in its price range.

In our carpet deep cleaning test, the Kenmore FeatherLite achieved a perfect score.

And it wasn’t close either. This aggressively priced Kenmore upright was much better than the Shark Navigator, for example, which tends to snowplow large debris, especially on hard floors.

On the handle, the FeatherLite has a suction adjustment switch for high-pile carpets or thick rugs. It also has a brushroll on/off switch with the idea being that you turn it on for carpeting and off for hard floors.

But in another comparison with the Shark Navigator, the Kenmore FeatherLite doesn’t need the brushroll switch as much. That’s because it has a wide fabric squeegee on the bottom of the floor head, just after the brushroll. This creates a better seal on hard floors, allowing you to keep the brushroll on for hard floors without scattering debris.

This is especially beneficial when cleaning up pet hair or human hair when compared with the Shark.

In our carpet deep clean test, the Kenmore FeatherLite achieved a perfect score. This is the test where we embed sand in medium-pile carpet. We measured the FeatherLite’s dustbin before and after the test, comparing the weight of what it was able to pick up with how much sand we put down, and there was no difference to speak of.

Suction is important in any vacuum, and as far as uprights are concerned, the FeatherLite has plenty of it. It scored above the average of all the uprights we have put through our suction test.

In this price range, most uprights tend to get longer hair wrapped around their brushroll, and that was the case with the FeatherLite too.

Two other areas where this upright scored below average were in our crevice pick-up test and our unsealed suction test. This wasn’t much of a surprise, as the large gates we spoke of earlier compromise the upright’s ability to form a seal on hard surfaces.

…with our new scoring system, where we judge how well vacuums pick up different sizes of debris on carpet and hard floors, the Kenmore FeatherLite Lift-Up scored the highest of any vacuum in its price range.

Every vacuum faces the same tradeoff. When there is more space, such as with the Kenmore’s gates, between the vacuum and the floor, large debris pickup ability improves. But as it does, the amount of suction declines as the vacuum cannot form as effective of a seal.

As a final note on that pickup and suction relationship, we think the Kenmore has found a sweet spot in that tradeoff.

For a budget-minded vacuum, Kenmore has squeezed a number of features usually found on more expensive uprights into the FeatherLite Lift-Up.

A completely sealed HEPA filtration system is fairly rare to find in upright vacuums that compete with the FeatherLite on price. A well-sealed system traps dust and fine debris inside the vacuum as opposed to exhausting it back into the room.

The HEPA-sealed system means the Kenmore FeatherLite traps 99.97% of dust and particles down to 0.3 microns in size. We think this is one of the most important features in a vacuum and were happy to see Kenmore had included it.

At under 12 pounds, the FeatherLite Lift-Up is one of the lighter uprights we’ve tested. For comparison, we also consider the Shark Navigator to be a lightweight upright, and it weighs nearly two pounds heavier than this Kenmore bagless.

The average upright weight among the 45 uprights we’ve tested recently is much heavier at 15.4 pounds.

Kenmore’s Lift-Up technology means you can remove the canister from the floorhead for above-floor cleaning. It is quite portable and effective in this configuration when paired with its included accessories.

We also liked that LED lights are present on the floor head, making it easy to see what you’re cleaning when going underneath furniture or into a dark area of a home.

We really like this vacuum a lot. In fact, if we did a “Best Upright Vacuum Round-up” the week our FeatherLite Lift-Up arrived, we’re confident it would have won the best budget upright category.

The two included accessories are decent. The first is a wide, non-powered upholstery brush. The second is a 3-in-1 combination tool. This tool can be used as a crevice tool, dusting brush, and upholstery tool.

The lightweight design of the Kenmore FeatherLite Lift-Up combined with its weight distribution, light handle, and swivel may make it the most easy-to-use vacuum we’ve ever tested.

The length of the FeatherLite’s cord is 25 feet, which isn’t bad or good, it’s just somewhere in between. We’ve compared this vacuum with the Shark Navigator a few times, and in this case, they both have a 25-foot cord. The average length of all the uprights we’ve tested recently is slightly higher at 30 feet.

There wasn’t a size listed for the Kenmore FeatherLite Up-Lift’s dustbin. If anything, it is on the smaller size from what we gathered while using it.

Emptying the dustbin was easy, and it is designed in a way that helps prevent it from clogging up too.

As testing this Kenmore upright continued along, it became more and more apparent that there is a lot of value here. The FeatherLite performs well – much better than others in its price range. It is not only easy to use and great at its main task of vacuuming, but it also includes a well-rounded set of features we’d expect to only see on premium upright vacuums.

As you’ve likely gathered, we are really happy with the Kenmore FeatherLite Lift-Up. The only real concern is that it is relatively new. Although it seems exceptionally well made and consumer reviews so far are mostly positive, there’s always a possibility that there’s some long-term issue that we’re missing.

Barring anything like that, we think we’ve found our new favorite budget upright vacuum in the Kenmore FeatherLite Lift-Up.

We are really happy with the Kenmore FeatherLite Lift-Up. The only real concern is that it is relatively new. And, although it seems exceptionally well made and consumer reviews so far are mostly positive, there’s always a possibility that there’s some long term issue that we’re missing.

But, barring anything like that, we think we’ve found our new favorite budget upright vacuum in the Kenmore FeatherLite Lift-Up.

The Kenmore FeatherLite Lift-Up is available online, including at the retailer(s) below.