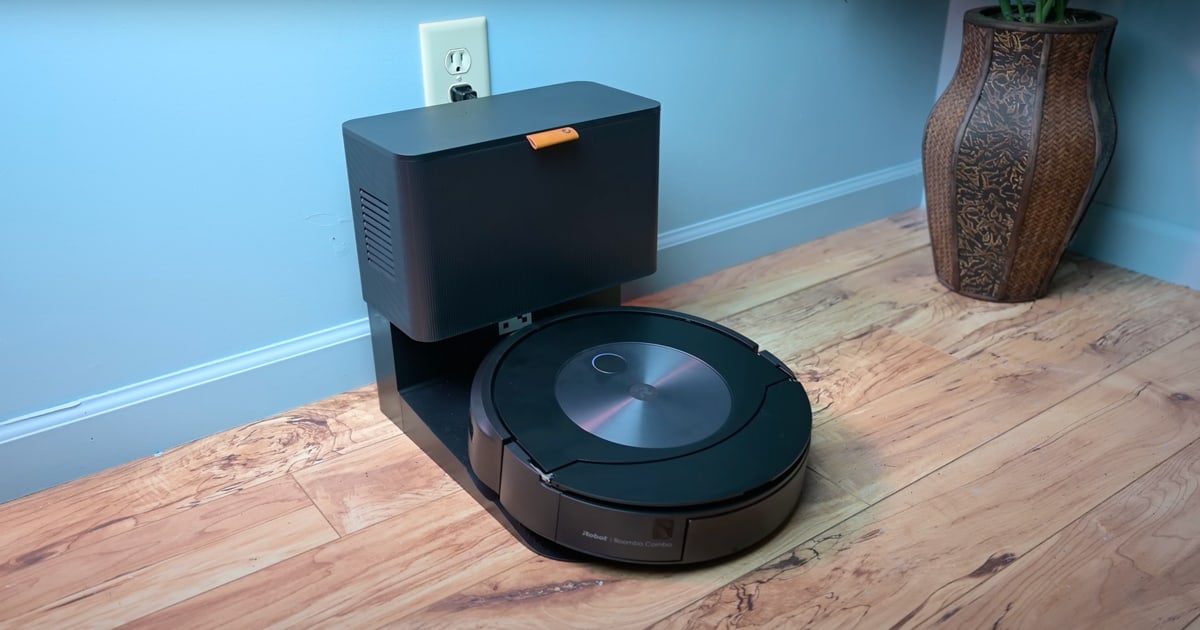 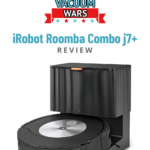 iRobot has launched it’s entry into the highly competitive 2-in-1 robot vacuum and mop category with the iRobot Roomba Combo j7+. It’s one of only a few premium robot vacuums with vacuuming, mopping and the ability to empty itself.

We bought one and ran it through a series of tests and were eager to see how it would perform, especially against Roborock’s S7 MaxV Ultra and Ecovac’s Deebot X1 OMNI, robots we had also recently tested.

Did we like it? Spoiler: the Roomba j7+ Combo landed a top spot in our Best Robot Vacuum 2022 edition.

The most obvious feature of iRobot’s latest vacuum is of course that the Combo j7+ is the first Roomba model that can both vacuum and mop. Before the Combo j7+ you could buy both robot vacuums and robot mops from iRobot, just as separate products.

iRobot’s last major feature release before the j-Series was auto-emptying docking and charging stations, available with the single s-Series robot, the s9+, the i-Series line and the Combo j7+’s non-mopping siblings.

Embracing that feature, the Roomba Combo j7+ was only available with iRobot’s Clean Base Automatic Dirt Disposal dock when released. On iRobot’s site we did find a manual for the Roomba Combo j7 lacking the plus designation. The manual shows the Combo j7 being available with a standard charging station. We expect iRobot to release that option next year although it may not be sold in all markets.

The first order of business was simply unpacking the box. Setting up the Combo j7+ is straightforward and there is very limited assembly necessary. And, unlike others we have reviewed, iRobot’s Clean Base ships fully assembled with a Dirt Disposal Bag pre-installed.

After unpacking the contents of the box, all there is to do is choose where to place the Clean Station, charge the Combo j7+ battery and complete the setup using the iRobot Home app. The app walks through each step and the whole process takes just a few minutes.

So, how did iRobot’s first robot vacuum and mop perform? In short, the Combo j7+ did very well.

The Combo j7+ did exceptional on every vacuuming test we put it through. Where hard floor testing was concerned, none of our tests phased the new Roomba.

One standout worth mentioning was the Roomba Combo j7+’s ability to pick up heavier debris on hard flooring. Many robot vacuums struggle with this, but the Combo j7+ isn’t one of them.

After completing our hard floor tests, we moved to carpeting. This is where the Combo j7+ really separated itself from the pack. This is partly due to iRobot’s patented dual-brush design which you won’t find on any other robot vacuum brand.

We put the Roomba Combo j7+ up against cords and other small items that wreak havoc with robot vacuums including fake pet waste. The Combo j7+ did a good job avoiding them and better than the j7 we previously tested.

The best reflection of its capability was our deep clean test. The Roomba j7+ Combo scored 91 points out of 100, far higher than 73, the average score of the more than 50 robot vacuums we tested.

Another notable vacuuming feature which the Combo j7+ has is called Dirt Detect technology. When Dirt Detect recognizes a dirtier area it cleans the area more thoroughly. Not many robot vacuums have this feature, and we applaud iRobot for including it.

Not only does Dirt Detect ensure a thorough cleaning it also helps extend battery life by only using higher amounts of suction power when the Combo j7+ needs it.

In our mopping tests the Roomba Combo j7+ did well, performing better than average with dry coffee and juice stains. On the dried coffee tests in particular it was able to get most of the stain removed with only a single pass.

Moving on to a torture test, we put it to work against a few large, dried V8 stains that were weeks old. While the Combo j7+ did make progress after numerous passes it did struggle in this regard. It may have been able to eventually get these stains out with additional passes.

Water, mopping and the brushroll housing

There is one extra note regarding mopping. In our tests, we found that some water made its way into the brushroll housing. At some point, while vacuuming, the water made dry debris wet, sticking it to the walls of that housing.

We didn’t think it was that big of a deal, but did want to note it as we would recommend checking that area and cleaning it as necessary.

There’s much more to talk about regarding the mopping system. We cover that in the features section below.

The Roomba Combo j7+ calls it’s auto-empty base Clean Base Automatic Dirt Disposal. Basically when the Combo j7 finishes cleaning and returns to the base to recharge, the contents of its dustbin are emptied into the Clean Base. iRobot was one of the first robot vacuum companies to introduce automatic dirt disposal, and we think they have one of the best designs.

iRobot says a Clean Base bag is good for around two months before needing to be replaced. And, while we didn’t try it, some owners have reported emptying the disposable bag and reusing it.

One of the latest robot vacuum technologies is obstacle avoidance. Called PrevisionVision, and also available on the standard j7 model, a camera and LED light on the front of the robot not only helps it navigate, but identify and avoid obstacles.

We put the Roomba Combo j7+ up against cords and other small items that wreak havoc with robot vacuums including fake pet waste. The Combo j7+ did a good job avoiding them and better than the j7 we previously tested. This is likely due to improvements in their library of things to avoid.

But, like the original j7, and most systems of this kind out there, it isn’t perfect. It’s still likely to get hung up on some items, especially those that have unique shapes. PrevisionVision obstacle avoidance is better than average, and we expect software updates will continue to improve its accuracy.

Like many advanced robot vacuums which also mop floors, the Combo j7+ mops and vacuums floors during the same cleaning runs. This creates a unique challenge for these robots. When they are mopping the floor and encounter carpet, how can they prevent the damp mop pad from transferring moisture to the carpet? And, how can they prevent dirt from being collected on the mopping pad.

iRobot took an approach we hadn’t seen before with the Roomba Combo j7+. When it comes into contact with carpet, a motorized arm lifts its mopping pad, placing it atop the robot. It continues along until it finds itself again over hard flooring and re-deploys the mopping pad.

In addition to being a clever stowing solution, iRobot notes that the motorized arm can also provide pressure to the mop pad, too.

In our tests we did couldn’t trick it into mopping carpet. Another feature of the mopping system is that it has a more expensive electronic water pump that normal. It allows you to use floor cleaner in its water tank as opposed to just water.

App and other features

There’s plenty more features to talk about as this is a premium robot. And, it’s long feature list is pretty much what you’ll find on competing high-end robot vacuums. Among the Combo j7+’s features:

The iRobot Home app is as well designed as any other and even those who have never owned a robot vacuum should find it easy to use.

We’ve already covered obstacle avoidance above. Of course, there’s more to a robot vacuum getting around than that, of course

As far as mapping and navigation are concerned, the Roomba Combo j7+ forgoes LiDAR, sticking with vSLAM. This is a departure from the move to LiDAR which iRobot took with the Roomba i7 and i7+, j7’s predecessor. Called Imprint Smart Mapping, the system has worked well for iRobot in the past and it works well for the Combo j7+, too.

Maps are stored in the iRobot Home app and are fully customizable. Among the more useful features is that a Room, Zone or Targeted area cleaning pass can be started with voice commands. Targeted cleaning is sending the Roomba Combo j7+ to a specific, known object. An iRobot’s example of this is “Alexa, tell Roomba to vacuum in front of the kitchen counter.”

Cleaning time when vacuuming and mopping

One negative is the amount of time the Combo j7+ can take when doing a cleaning pass in which it will both vacuum and mop. And, it comes down to a choice in navigation.

iRobot chose to first vacuum and to then mop. It’s a logical way to clean, but it can cause long cleaning times, especially in floor plans which switch between carpet and hard flooring. In what we would consider a normal 400 square foot area in our test home, the Roomba Combo j7+ took an hour an twenty minutes to vacuum and mop.

It’s main rival, the Roborock S7 MaxV was able to complete the same job in 50 minutes. It achieved that shorter time by alternating between vacuuming and mopping as opposed to completing all of its vacuuming before mopping.

Some may find that to be an issue, but as an overall package, the Roomba Combo j7+ does a great job cleaning. It is far better than most robot vacuums on the market today. And, of course, our experience was in a our environment, not your home.

All in all the iRobot Roomba Combo j7+ is one of the best pure vacuuming robots on the market. Its auto empty bin and mopping system worked perfectly in our tests and are a huge value add above its competitors, even if will take a little longer to complete its job and a little more effort to prep and maintain the robot.

Even with its areas of improvement, the Combo j7+ is still a quality buy from one of the best robot vacuum companies in the world today. 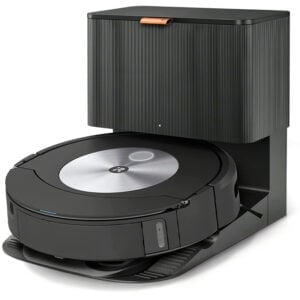 All in all the iRobot Roomba Combo j7+ is one of the best pure vacuuming robots on the market. Its auto empty bin and mopping system worked perfectly in our tests and are a huge value add above its competitors, even if will take a little longer to complete its job and a little more effort to prep and maintain the robot.

iRobot’s Roomba Combo j7+ is available online, including at the retailer(s) below.