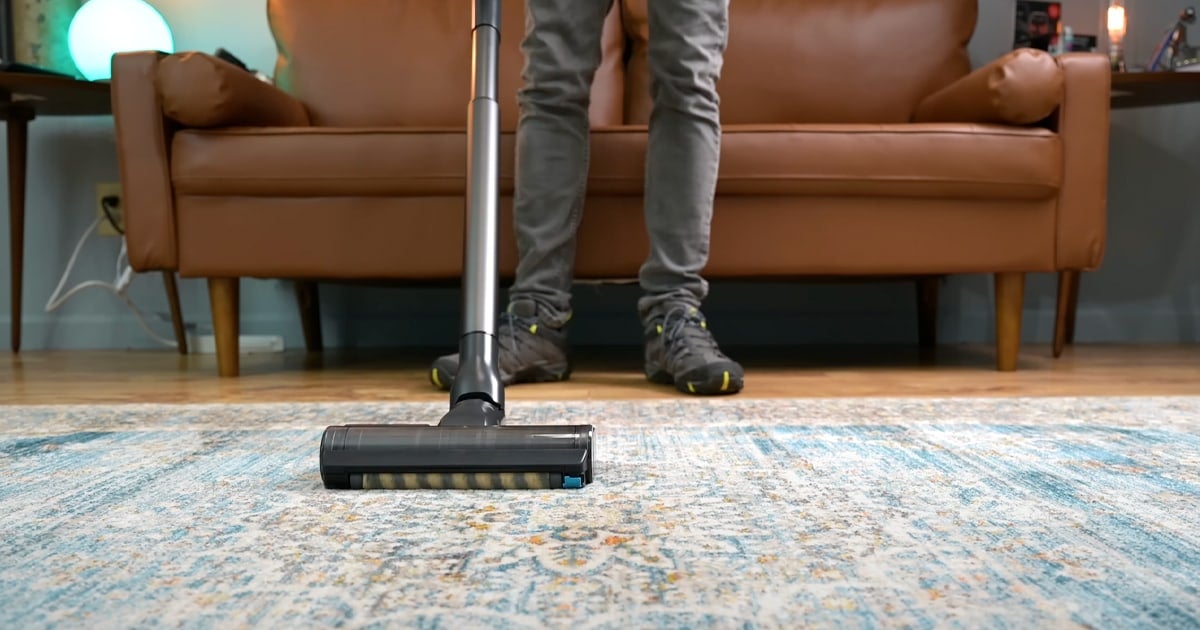 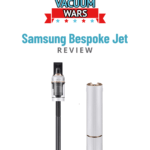 In this review we will be taking a look at the Samsung Bespoke Jet, the flagship of Samsung’s cordless vacuum line.

Released after the numbered Jet stick models, the Bespoke model is the most capable Samsung cordless to-date, and the most expensive cordless vacuum we have ever reviewed.

With that high price comes a ton of advanced specs and features. We bought one and put it through all kinds of tests this week to see if it was worth the hype.

Spoiler: it kind of is!

When it arrived we assembled both the vacuum and the integrated Clean Station. The vacuum itself is familiar, like the previous Samsung Jet cordless models we have tested. The Clean Station, however, is a big departure from the design previously used for the Jet 70, 75 and 90 models. We’ll get to that a bit later.

After allowing one of the included batteries to charge, we got down to business.

As we have eluded to already, the Bespoke Jet did well in our testing. Compared with the average of all cordless vacuums we have tested, it got great marks across the board.

It did excellent in our Carpet Deep Clean Test, had ample airflow and suction and even managed to keep the amount of noise it generates to a reasonable level.

The Bespoke Jet is Samsung’s first cordless vacuum with the new Jet Dual Brush design. It has both soft roller in the front and standard brushroll behind it in the same cleaning head.

The soft roller brush is there for improved cleaning performance on hard floor surfaces. The design creates a near perfect seal on floors while still allowing large debris to be picked up.

This design makes it much better for hard floors than traditional vacuums are. And, since it has a traditional brush roll, too, you can transition directly to carpet from hard floors or vice versa. There’s no need for changing settings or the entire head like with Dyson soft rollers, making it a much better experience if you have a mix of hard floors and carpets in your home.

Vacuuming on carpets and hard floors

That brings us to how the Bespoke Jet performed in our cleaning tests. In our pickup tests, we found it to be about as good as it gets on carpets. The Bespoke Jet picked up everything from fine to extra large debris with no issues at all.

And, on hard floors, it was much better than the average cordless vacuum. It picked up everything from fine dust to larger debris without much issue. One area where it did have a bit of a challenge was with bigger debris, larger pieces of cereal in this case, where it did sometimes push the cereal around as opposed to immediately pulling it in.

In its Max power setting, the Samsung Bespoke Jet has the more raw suction at the base than any other cordless vacuum we’ve tested.

What causes the Jet Dual Brush to push, not pull in large debris at times, is that the soft brush isn’t motorized. Instead, as the head is moved, wheels make contact with the flooring surface and the brush slowly spins in turn.

While it isn’t an issue in many situations, it does fall short of motorized brushes in this configuration. An example of a high-performing, powered dual brush setup is Shark’s DuoClean brush roll system which is available on their flagship stick vacuum, the Shark Stratos cordless.

So, while the Bespoke Jet wasn’t perfect, it was very close.

Rounding out our vacuum tests, the Samsung Bespoke Jet also did really good at vacuuming deep down embedded dirt in carpets, scoring well above average in our deep clean tests.

This test in particular is something that cordless vacuums with soft-roller combo heads have struggled with in the past, so we were glad to see it perform so well. So, to wrap up the cleaning tests, the Bespoke Jet performed very well at both surface debris pickup and deep cleaning.

In its Max power setting, the Samsung Bespoke Jet has the more raw suction at the base than any other cordless vacuum we’ve tested.

It’s unsealed suction at the head and both airflow at the head and base were significantly above average, giving it top notch performance results as a handheld as well as with our crevice pickup tests.

The Bespoke Jet has good battery life, getting an hour of use on Low power with non-powered tools and up to 42 minutes with a powered head. As you’d expect, as we increased the Bespoke Jet’s power setting battery life in turn shortened.

The power setting we would use it on the most would be the medium setting (called Mid on the Bespoke Jet) which would be about 24 minutes per charge. And, we can then double that number, or any of the other above, as the vacuum comes with a second battery and charger.

One surprise was that despite the strong motor and high suction power that the Samsung Bespoke Jet delivers it still produced less noise than the average of nearly 50 cordless vacuums tested in both its lowest and maximum suction settings.

We don’t know if the vacuum’s reduced noise is the product of a more efficient motor design or sound insulation, but Samsung is doing something better than most in this regard.

All in One Clean Station and Charging Dock

When looking at the Bespoke Jet, the most obvious characteristic is probably the new CleanStation design.

The Clean Station acts as both a charger and stand. And, with the touch of a button, it will empty the Bespoke Jet’s dustbin into a disposable bag.

We haven’t talked about the LCD screen on the Bespoke Jet much. In contrast to some other cordless models, Samsung’s display provides simplistic information. When charging, it reports the battery’s level.

When in use, it displays which suction mode the Bespoke Jet is in and how many minutes of cleaning time remain. We noticed that the calculation and display of battery life is accurate which isn’t always the case considering other vacuums we have tested.

Samsung incorporated a 5-layer filtration system into the Bespoke Jet. You only see this level of filtration and seal with the very best cordless vacuums. It almost goes without saying, but it passed all of our related tests with perfect scores.

Ease of use was a big plus with the Samsung Bespoke Jet. It’s handle was lighter than average, much lighter than the Dyson V11 or V15 Detect, but also lighter the average of over 50 cordless competitors we have tested.

The handle’s shape and weight distribution made it noticeably easier to use on both hard floors and carpets as well as in handheld mode.

Speaking of handheld mode, it has a ton of suction which makes it particularly good at handheld cleaning. And, Samsung has provided exceptionally high quality attachments with this model including a Combination Tool (for dusting and focused suction), an extendable crevice tool, a motorized Pet Tool, and a Flex Tool for use in hard to reach places.

Like its closest Samsung predecessor, the Jet 90, the Samsung Bespoke Jet has a telescopic pipe which can be adjusted to be longer or shorter. This is helpful for not only cleaning, but also for storing the vacuum.

And, because of its shorter profile and higher suction it is one of the few cordless stick vacuums that we would recommend for things like auto detailing.

As we mentioned, this is the most expensive cordless vacuum we have ever tested. But, it isn’t that far off from other premium cordless models.

And, you do get a lot more bang for the buck with the Samsung Bespoke Jet including a better handheld experience, a head you don’t have to change depending on the floor type, very comparable power and battery life, an extra battery, and all the features you only see on the best of the best cordless vacuums.

The Samsung Bespoke Jet is the most expensive cordless vacuum we have ever tested. But, it isn’t that far off from other premium cordless models. And, you do get a lot more bang for the buck with the Bespoke Jet including a better handheld experience, a head you don’t have to change depending on the floor type, very comparable power and battery life, an extra battery, and all the features you only see on the best of the best cordless vacuums.

The Samsung Bespoke Jet cordless vacuum is available online, including at the retailer(s) below.