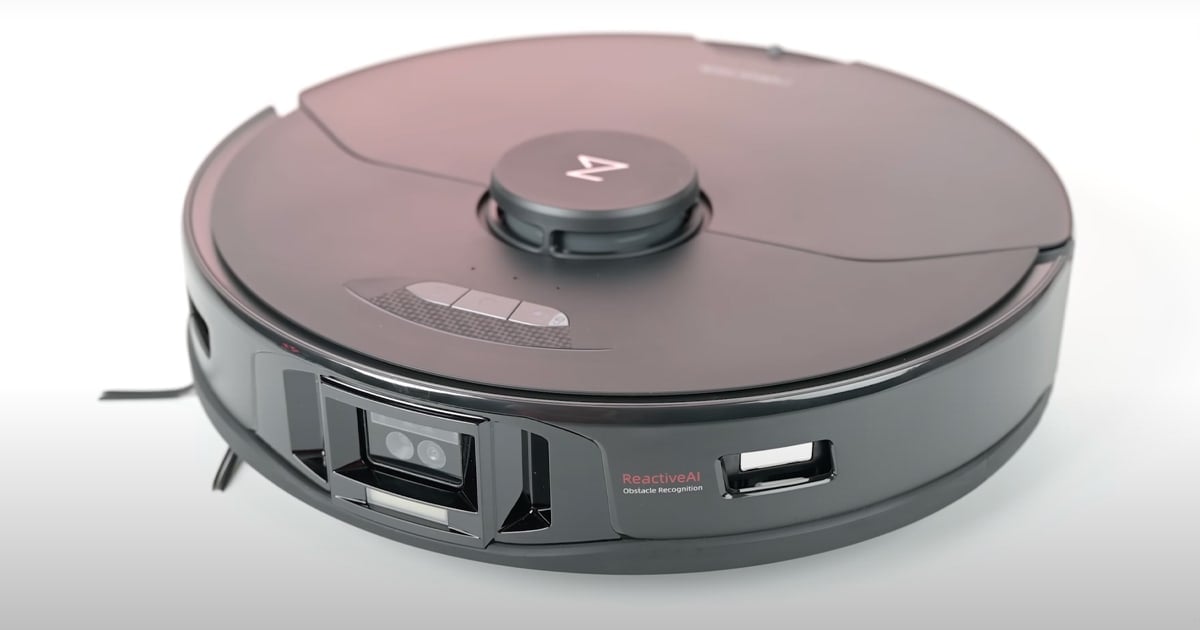 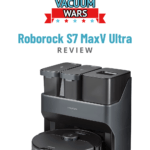 Today we are looking at the Roborock S7 MaxV Ultra. These just might be the future of robot vacuums – a robot vacuum that comes with a dock that not only empties its dustbin automatically but also washes and refills its mop system, too.

We’ve put it through all kinds of tests over the past two weeks and have a lot to say about this premium Roborock robot.

The S7 MaxV is the latest flagship robot vacuum and mop from Roborock. Its two predecessor models are the standard S7 and the S6 MaxV.

The S7 MaxV also has upgrades to its obstacle avoidance system that the S6 MaxV does not, making it Roborock’s most advanced robot yet.

The S7 MaxV is being sold as the S7 MaxV Plus and S7 MaxV Ultra, with the difference being that the Plus version comes with Roborock’s old-style auto-empty dock, which can have a bagged system or the new bagless module (sold separately).

As we’re focused on the S7 MaxV Ultra in this review, the dock we will talk about at length is the Ultra dock. It goes far beyond emptying the robot and charging it. Before we get to that, here are the high-level specs on Roborock’s latest flagship.

There’s a lot in the box for the Roborock S7 MaxV Ultra. We bought ours online, and when it arrived we unpacked it and got it ready to test. While it’s easy to set up, there is a bit more to it than most, basically because there is more to this robot than most.

Like all smart robots nowadays, setup is quick and easy using a mobile phone. The longest part of the setup process will likely be waiting for the robot’s battery to charge to 100%.

Roborock has made a name for itself with its highly capable robots. So, we expected their top model would perform well. Here’s how it fared.

Roborock claims that the S7 MaxV has the most suction of any Roborock robot vacuum ever at 5100Pa. That’s double the suction of the S6 MaxV and standard S7 model, both of which have 2500Pa.

In the suction and airflow tests, we did find that the S7 MaxV has at least twice the amount of suction as the original S7. It also excelled in related tests, like the crevice pickup test where it was well above average as well as in the carpet deep clean test. The carpet deep clean test involves embedding sand into deep pile carpet and weighing the robot’s dustbin before and after a set amount of cleaning time.

We’ve always spoken highly of Roborock’s abilities to sweep hard floors and carpets, meaning the pickup of debris on hard floors and carpets. And the S7 MaxV is as good as or better than previous versions. There was very little scattered debris from the side brushes, and a nice, clean pickup on its default power setting, even with difficult tests like cat litter and sand on hard floorings.

The S7 MaxV was as good as it gets in terms of picking up dirt and debris of various sizes from the surface of floors.

The mopping system Roborock developed for the S7 MaxV is what really sets it apart from its competition. It seems to be the same system that we saw on the S7, which has a separate electric water tank and a detachable plate where you can attach either a microfiber or disposable pad.

The S7 MaxV has the same sonic vibration technology we saw on the S7, which vibrates the pad mechanically for better loosening of stuck-on stains. It also has the motorized lifting of the mopping pad when it senses carpet, which makes it the only robot vacuum where you can leave the mopping pads on and it will figure out when to mop and not to mop in your house.

In our mopping tests, it was exceptional. It was able to completely clean both the dried-on grape juice stains and the dried-on V8 stains in two runs, making it one of the better performances we have seen with the possible exception of the regular Roborock S7, which as mentioned, has the same mopping system.

It did well with water distribution (see the infrared images below).

The S7 MaxV has the same 5200 mAh battery seen in most recent premium Roborocks, with the official spec being three hours of run-time on Low power, which is well above average even for expensive robot vacuums.

The Roborock app has always been a favorite of ours. It is feature-rich and intuitive, but they’ve recently added more features having to do with layers for the map, including a 3D map mode and a Matrix map mode.

As opposed to the 2D map mode, which is somewhat like looking at a floor plan, 3D map mode and Matrix map mode shows the home in 3-dimensional space.

Both of the new map modes allow you to zoom and rotate the map in 3D. For now, you can monitor the robot’s cleaning progress in these modes, but for more complex functions, like room naming and map customization, the standard 2D mode is required.

Beyond the new mapping modes, the Roborock app is excellent. Everything you would expect to find in the app for a premium robot vacuum is there.

One feature that also taps into the S7 MaxV’s advanced camera and connectivity systems is the ability to monitor your home remotely. We stick to features related to cleaning but wanted to at least mention this as some might find it interesting.

The dock is one of the biggest features to talk about with the S7 MaxV. When the robot returns to its base to charge, it will not only empty the S7 MaxV’s dustbin automatically, but it will wash the mopping pad and refill the clean water tank on the robot.

This is a big deal as it moves us closer to the dream of a completely automated floor cleaning system. From what we could tell, it was as advertised. It cleaned the mopping pad with the dock’s active scrubbing system, and there were no leaks or obvious issues.

The clean and dirty water tanks seemed to be well-built and very easy to use. Really, the only question we have is how long the new dock will hold up in the long run. The reason for wondering about that is due to the additional moving parts it has compared with previous Roborock docks, such as its internal scrubbing system.

More moving parts mean more possible points of failure. But if it holds up, and we see no reason why it shouldn’t, it is the system to beat for now.

The S7 MaxV was great with navigation as most Roborocks are. In our coverage test, a good gauge of navigation capability, it had almost 100% coverage in both the large and small room tests in a short amount of time.

It also mapped our home the first time using its new initial mapping program, which doesn’t clean, but sort of looks around for a few minutes to get the basic layout of the floor plan, which we like.

It was able to successfully navigate the house on its first run without incident. The S7 MaxV Ultra has No Go Zones, where you can draw boxes or lines on the map in the app to keep the robot from going where you don’t want it to go. This is a feature we use and recommend.

We tested it in a variety of ways and found it was able to avoid various obstacles like cords, cloth, small objects, and novelty pet waste.

It avoided all the obstacles in the controlled test, something that only a handful of these AI robots have pulled off.

In a real house, we noticed that there was a difference in its obstacle avoidance on rugs with a busy design. When testing Reactive AI with the same objects but on hard flooring, the S7 MaxV had no problem identifying the obstacles and avoiding them, however.

The S7 MaxV is one of the better robots with AI-based obstacle avoidance. But it’s not perfect, nor are any other of the AI-based robots we have tested. Expect it to take some time to learn with its AI, and be sure to get frequent updates to its image library through app updates.

The Roborock S7 MaxV Ultra is one of the most expensive robot vacuums ever sold. When released, MSRP was around the $1,500 range. Even with its sophisticated dock, the price can be alarming at first glance.

But value is performance in terms of price, and by that measure, the Roborock S7 MaxV Ultra has a lot to offer. It is a very advanced robot vacuum that performs well in all regards. And being able to not only empty its own bin but also refill its water tank and maintain its mopping pad is a game changer.

Our take on the Roborock S7 MaxV Ultra is that other than the high price, there is very little not to like about it. Having been using the S7 MaxV Plus at home for the past few months, we’re trading it out for the S7 MaxV Ultra.

With more time under its belt, we’ll report back on how the Ultra dock holds up with constant use. If it holds up, without a question, the Roborock S7 MaxV Ultra will be the best all-around robot vacuum system in the world.

Do we recommend the Roborock S7 MaxV Ultra? Yes, we do. For those who are interested in the best 2-in-1 robot vacuum money can buy, the S7 MaxV Ultra won’t disappoint.

Even with its sophisticated dock, the Roborock S7 MaxV Ultra’s price can be alarming at first glance.

But, value is performance in terms of price, and by that measure the Roborock S7 MaxV Ultra has a lot to offer. It is a very advanced robot vacuum that performs well in all regards. And, being able to not only empty its own bin, but also refill its water tank and maintain its mopping pad is a game changer.

For those who are interested in the best 2-in-1 robot vacuum money can buy, the S7 MaxV Ultra won’t disappoint.

The Roborock S7 MaxV Ultra is available online, including at the retailer(s) below.