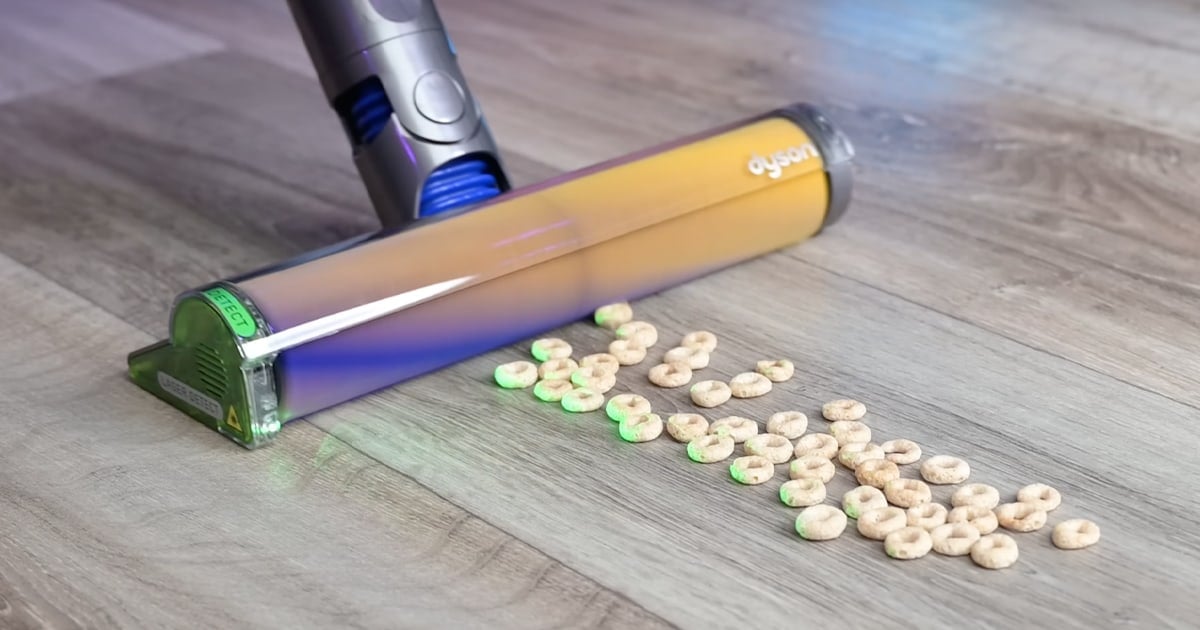 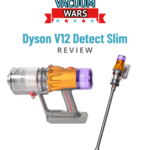 Here it is – our review of the Dyson V12 Detect Slim cordless vacuum. It has all the latest tech that Dyson puts into its cordless vacuums. We bought one and tested it to see how it stacks up against other Dyson stick vacuums as well as competition from competing brands. Here’s what we learned.

Where product numbering is concerned, Dyson sometimes jumps around a bit. That’s the case here with the V12 Detect, which was released after the V15 Detect. It has a lot in common with that model – offered as a more compact, lighter package. Here are the high-level specifications of the V12 Detect Slim.

The V12 Detect Slim is a much needed addition to Dyson’s cordless lineup, and it’s a good addition to the cordless vacuum market in general. Competition among premium cordless vacuums is high with not only vacuums like the Samsung Bespoke Jet vying for the top spot, but other Dyson vacuums, too.

So, what makes a great cordless vacuum anyway?

The cordless vacuum industry is all about balance. Power can be achieved with a large motor, and longer run times are a matter of supplying a bigger battery. The challenge for manufacturers is that both of those things make the vacuum larger and heavier. Adding too much of those things however, changes a product that was meant to be convenient and easy to use into something harder to maneuver.

On the opposite end of the spectrum, manufacturers can design vacuums that are incredibly small. The Dyson Micro, Dyson’s smallest cordless vacuum, is a great example of this; it is light and easy to use, making it especially great for handheld cleaning. In order to get that ease of use, the sacrifice is having a small motor powered by a small battery. The result is a lot less power, and in the case of the Micro, a vacuum that is only suited for hard floors.

When considering the current Dyson model lineup, the V12 Detect Slim looks to be Dyson’s attempt at finding that sweet spot for balance: enough suction power to be genuinely useful while still being light and maneuverable.

As far as size goes, the V12 fits neatly between the V15 and Micro in terms of size and weight, while its power and battery life numbers are fairly similar to the V15. It ships with both a soft roller head and a combo head too, so the V12 can be used in the same ways as the V15: on carpet, rugs, and on hard floors too.

Which attachments you get varies depending upon the package you buy. The V12 Detect Slim we bought came with a standard set of attachments: Combination Tool, Crevice Tool, Wand Clip, and Hair Screw Tool.

If you purchase a V12 Detect, do take note of which attachments are included to be sure you are getting a package that meets your needs.

We tested the V12 Detect in all of its power modes. Its numbers for suction and airflow came in well above the average of 53 cordless vacuums we have tested previously.

Both our suction and airflow measurements confirmed that this vacuum is massively powerful. In fact, the V12 Detect comfortably ranks in the top 10 best cordless vacuums we’ve ever tested.

When compared with the V12, the more powerful V15 did outperform it, however it’s important to take that balance we talked about into account. In our tests, the V12 showed 82% the suction and almost 84% the airflow of the V15. Yet the V12 is far lighter – one-quarter the weight of the V15!

When compared to the Micro, the V12 showed far more suction and almost twice the airflow.

In lockstep with previous Dyson models intended for all flooring surfaces, the V12 Detect Slim includes two full-sized cleaner heads. The first is a standard head which can be used on both hard flooring surfaces and carpets. The second is a fluffy head which is specifically for vacuuming hard floors such as wood and tile.

That second head, called the Laser Slim Fluffy cleaner head, is the same as the one that caught everyone’s attention when the V15 came out. While some manufacturers include headlights to aid in cleaning, this Laser Slim Fluffy head employs a laser to light up dust and debris in its path. It really does seem to show more dust than LED lights are capable of showing. While we thought this was going to be a gimmick, it’s actually a helpful feature.

Testing the V12 Detect with the Laser Slim Fluffy head yielded near-perfect results on hard floors. It picked up everything we asked it to, all the way from super fine debris to large, ridiculous piles of debris.

In testing the V12 Detect with the combination head, called the Motorbar cleaner head, it did well at picking up just about any debris scattered on the surface of carpeting. On hard floors it did tend to struggle with larger debris. This is due to the head’s design, and while this is a shortcoming, the Motorbar cleaner head is still quite good for carpet.

The convenience factor means that people who have homes with a mix of hard floors and carpeting may stick with using just the Motorbar as opposed to switching back and forth between it and the Laser Slim Fluffy head.

The V12 Detect Slim put its power to good use in our Crevice Pick Up and Usable Suction tests. Its results were way above average and just a touch below the V15.

This was one area where the V12 Detect Slim didn’t perform quite as well as Dyson’s bigger cordless models. It did score 96 out of 100, which isn’t a bad score at all. The average of over 50 previously tested cordless vacuums was 92 at the time of doing this test, so the V12 Detect was better than average. It just was not quite as good as those bigger Dyson cordless models.

The V12 Detect Slim is an expensive cordless vacuum, but it is also a very good one. While buying one is an investment, we feel confident recommending it, even with its high price.

We were able to verify Dyson’s claim of one hour of cleaning on the low, or Eco power setting, with a powered attachment. All of the battery tests that we performed with the V12 Detect had very similar results to what we saw with the V15.

By the measure of any cordless vacuum, including other recent Dyson models, the V12 Detect Slim has as many if not more features.

The V12 Detect has the same LCD display found on the V15. This LCD shows real-time battery life estimates that change based on the power level and attachment being used. This is an extremely helpful feature, which also tends to be extremely rare on cordless vacuums.

The V12 Detect has an Auto mode which comes by way of a piezo particle sensor. As dust and debris is sucked into the vacuum, the particle sensor counts and measures the size of dust particles.

The V12 Detect will then automatically increase suction when necessary.  Auto mode ensures the best cleaning performance while also extending run time before needing to charge the V12’s battery.

The V12 Detect also reports its particle count on the LCD display. While minimally helpful, it is kind of cool!

If you own another Dyson cordless vacuum it is important to realize that the attachments from other models are not compatible with the V12 Detect Slim.

The particle count does make sense when you consider the V12’s whole-machine HEPA filtration system. This system traps tiny particles, down to 0.3 microns, which is about as good as it gets.

Whole-machine HEPA filtration is only found on premium vacuums, and in Dyson’s case, its system is well-sealed.

We mentioned the V12 Detect’s Laser Slim Fluffy head above, but it is worth mentioning again. Where features are concerned, this cleaning head as a whole is pretty great, and it’s not just the laser either.

The Laser Slim Fluffy head is excellent at picking up debris on hard floors, and the laser light really does help see what needs to be cleaned as well as progress made. After using it, it seems like it does a far better job of identifying areas that have been missed when cleaning than LED lights are capable of.

De-tangling is how Dyson notes a cleaning head has anti-hair wrap technology. On the V12 Detect Slim the multi-surface, full-size head is referred to as the De-tangling Motorbar. When describing the Hair screw tool, Dyson notes its De-tangling conical brush bar.

While not mentioned on Dyson’s site, we found the Laser Slim Fluffy head to resist hair tangling too. We tested both of the V12’s full-size heads with short and long hair and found no tangling whatsoever. Dyson has been working on this technology for years, and it has improved with the V12 Detect.

As we mentioned earlier, the V12 Detect Slim package we purchased included the Hair Screw Tool. This is a motorized mini-tool designed for use on upholstery or in small places. It is also equipped with de-tangling tech, and it was all but foolproof in our tests.

The V12 Detect has a clickable battery that is simple to remove and replace, which should be standard with cordless vacuum cleaners. We do wish that the batteries from our V15 could be used with the V12, but they are not interchangeable.

We have found bigger cordless vacuums like the V15 to be awkward in handheld mode. In this configuration however, the V12 Detect has dramatically improved handheld maneuverability, making it a more versatile tool.

On the Dyson website it states that the V12 Detect Slim is United States Ergonomic certified. We looked it up, and the certification means that a “product that has received certification provides measurable ergonomic benefits to the user by improving comfort and fit and by minimizing the risk factors that may cause injuries.”

The V12 Detect Slim is an expensive cordless vacuum, but it is also a very good one. While buying one is an investment, we feel confident recommending it, even with its high price. The reason why is that Dyson vacuums are consistently well designed, rigorously tested, and tend to last quite a long time, in addition to just being great vacuums.

The bottom line is that the Dyson V12 Detect Slim or Absolute are almost everything that the V15 is, but in a smaller package. While that might not sound like much, it must have been a monumental engineering feat to make it happen.

The Dyson V12 Detect Slim is one of the ten best cordless vacuums we have tested to date. It is well made, easy to use, and does a great job cleaning. We really think people will like it.

The Dyson V12 Detect Slim is available online, including at the retailer(s) below.