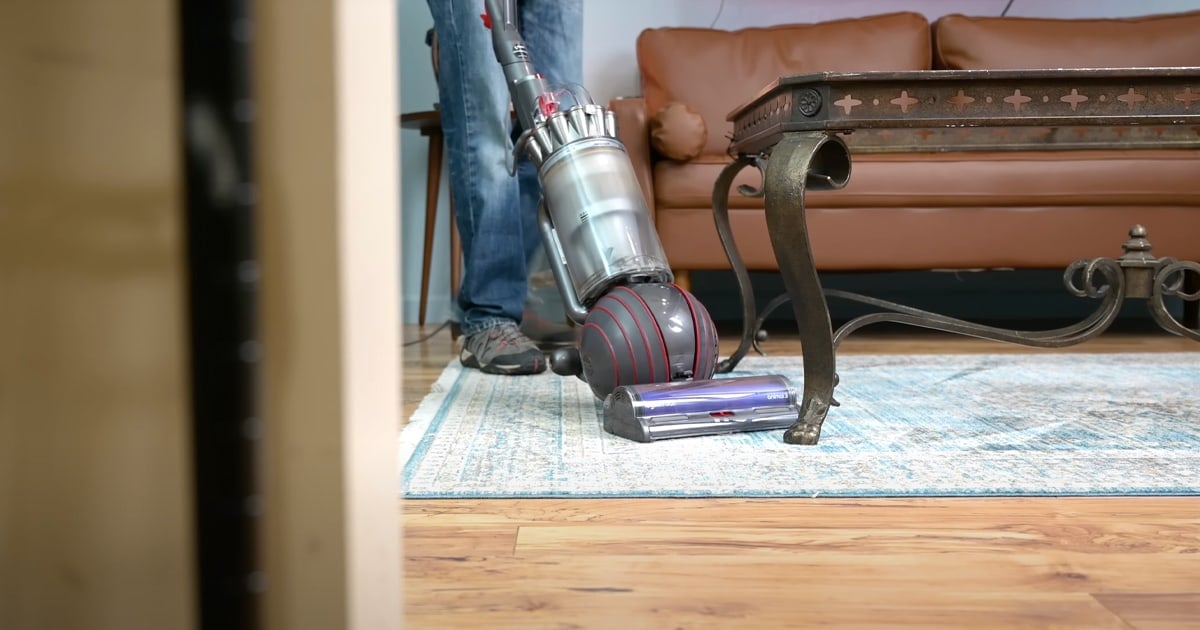 Curious about the Dyson Ball Animal 3? We were, so we bought one and got to work putting it through our various tests. It has actually been a while since Dyson released an upright vacuum, so we were interested in how it would perform compared to the previous Dyson Ball Animal (and hoped Dyson worked out some of that model’s kinks).

Spoiler: The upgrades and new features engineered into the Dyson Ball Animal 3 were well worth the wait!

If you’re buying a corded upright from Dyson today, then you’re buying a Dyson Ball Animal. What we’re reviewing today is the successor to the 2 model, clearly denoted by the 3 in its name. It’s nice that Dyson sequentially numbered its releases here (which can’t be said with, oh, say the Dyson V12 Detect Slim, which came out after the Dyson V15.)

Variations of the Dyson Ball Animal 3

The differences between the three models are slight variations in color and the different accessories each comes with. The Extra model has more attachments than the standard model, and the Complete model has the most. As the number of attachments increase, so too does the price.

As we unboxed and assembled our Ball Animal 3, we noticed that some features have remained from previous generations. The ball design has carried through as did Dyson’s whole-machine HEPA filtration and the same super-long, 15-foot hose and wand design.

* See the chart above for accessories in other Ball Animal 3 packages.

Assembly is like any other vacuum. By clicking a few pieces together, the vacuum is ready to use in just a few short minutes.

Premium upright shopping? Also check out our review of the Shark Stratos Upright, another high-end upright worth consideration!

Some like the visual design of the Ball and others aren’t as fond of it. The design is an award winning one, with a predecessor winning a Good Design Award, but that was several years ago. Regardless, we’re not here to talk about its looks, just how it performs.

Where performance is concerned, we’ll lead with suction and make our way through everything our tests revealed.

Another carryover from the previous model, the Ball Animal 2, is lots and lots of suction. That previous model actually had the most raw suction we had ever measured in an upright vacuum cleaner.

In our tests, the Ball Animal 3 had almost identical suction and airflow numbers to the Ball Animal 2. One area where the newer model showed improvement was in our usable, or unsealed suction, test.

The results above are from Vacuum Wars’ independent testing, not from the manufacturer.

How the third iteration of the Ball Animal achieved its far better-than-average scores largely comes down to Dyson’s improvements to its head design.

We think improvements to the cleaning head are the real star of the show for this upright vacuum in more ways than one, and we’ll talk about the head design more throughout our review.

The Ball Animal 3 did great in all of our tests. It put all of its power to good use in our Crevice Pickup Test and our Carpet Deep Clean Test, both requiring strong suction to achieve high scores.

When comparing this Dyson upright with previous Ball models, we were impressed. In all of our various tests, it was much better with hard floor pickup, and while it performed great on hard flooring, on carpets and rugs is where it really shined.

It was like the best of both worlds: with the Dyson Ball Animal 3 you get a vacuum with the ability to handle larger debris while still getting top-notch carpet deep cleaning performance on that same setting.

The various packages offered by Dyson have the same long list of features. Here are just a few that stood out, starting with that new cleaning head.

Dyson’s all-new cleaner head design is the star of the show. In fact, we think this new head is the main thing that sets it apart from previous Dyson uprights.

If you have an older Dyson upright, the first thing you may notice is the Ball Animal 3’s  smaller cleaning path width. We actually prefer this, as it gives you more options when maneuvering in tight spaces

It’s also the first time Dyson has included adjustable gates on the front of the head, at least in a U.S. upright vacuum model. We found this made it so much better for larger debris pickup on hard floors, rugs, and carpet.

Being able to use the vacuum with the gates opened or closed makes a big difference. The Ball Animal 3s’ new head design makes it a more valuable and versatile upright vacuum and even eliminates some deal breakers we had with previous versions.

For example, the Ball Animal 2, which had a fixed height, would get bogged down and stall out on particularly thick carpet and rugs. But with the gates open, when testing those same carpets and rugs the Ball Animal 3 glides on them with no trouble at all.

When you vacuum with gates all the way open as we did above, you tend to sacrifice a lot in terms of suction and airflow at the head. But interestingly, in the usable suction tests, we found that the Ball Animal 3 had the same amount of suction at the head with its gates open as the Ball Animal 2 did on its one and only setting.

It was like the best of both worlds: with the Dyson Ball Animal 3 you get a vacuum with the ability to handle larger debris while still getting top-notch carpet deep cleaning performance on that same setting.

Like previous models, the Ball Animal 3 has Dyson’s whole-machine HEPA filtration system. The system can trap particles down to 0.3 microns, which is just about as good as it gets in the vacuum world.

This level of filtration is usually only seen on premium upright vacuums, and it does make a difference. Machines without HEPA-level filtration often exhaust those smaller particles back into the room they were captured from, either through ineffective seals or the vacuum’s exhaust.

Another big upgrade on the cleaner head is the active hair removal system, which we first saw on the Dyson V15 cordless floor head. The idea is that it kind of combs out the hair and reduces hair tangles as you vacuum. Dyson calls them Hair Removal Vanes.

We tested them with 7 and 14-inch human hair in separate tests, and it had virtually no brushroll tangles. This is a pretty big deal – it performed much better than previous Dyson uprights, which were basically magnets for hair.

It also has the same one-touch, Dyson hygienic bin emptying design employed by those models.

If there is a negative where ergonomics are concerned, it could be the upright’s weight. The Ball Animal 3 weighs in at just about the same weight as the Ball Animal 2. We consider it to be kind of heavy, but it is a premium vacuum designed for top-tier power, so we can’t really have it both ways.

The Ball Animal 3 has definitely improved where ergonomics are concerned. The ball design concept is an accurate swivel system, which generally makes it easy to maneuver.

Another small change that we appreciated was that Dyson narrowed the width of the cleaning head from the previous models. This makes it easier to get the Ball Animal 3 in and out of tight spaces, even making areas previously inaccessible somewhere it can clean.

When comparing this Dyson upright with previous Ball models, we were impressed. In all of our various tests, it was much better with hard floor pickup, and while it performed great on hard flooring, on carpets and rugs is where it really shined.

The total reach of the Ball Animal 3 is a full 50 feet. That range comes by way of an improved 35-foot cord and a fully extended hose. This long range may reduce the need to lug the vacuum up stairs or make it easier to clean awkward or hard-to-reach places. Previous Ball models had 30-foot cords.

Dyson vacuums are generally expensive. But with the Ball Animal 3, what you get in return is an excellent upright vacuum with a long, 5-year warranty. We were more than happy with the model we purchased, which was the standard or base model.

We recommend the standard model if you don’t have a specific need for the attachments and accessories that come with the pricier models. It is the exact same vacuum cleaner, just without specialty accessories.

It’s been a few years since Dyson released a new upright and after putting this one through all kinds of tests, we think the upgrades and new features on the Dyson Ball Animal 3 were well worth the wait.

In our opinion, the person who would benefit the most from this vacuum would be someone with 50% or more carpets in their home. While we believe the Dyson Ball Animal 3 is the best Dyson upright vacuum yet for hard floors, its carpet performance is where it really outshines its competition.

We also think it’s the best Dyson yet for pet owners because of its HEPA filtration, which will keep the pet dander to an absolute minimum, and its new anti-hair tangle features.

The Dyson Ball 3 is available for purchase online, including at the retailer(s) below.