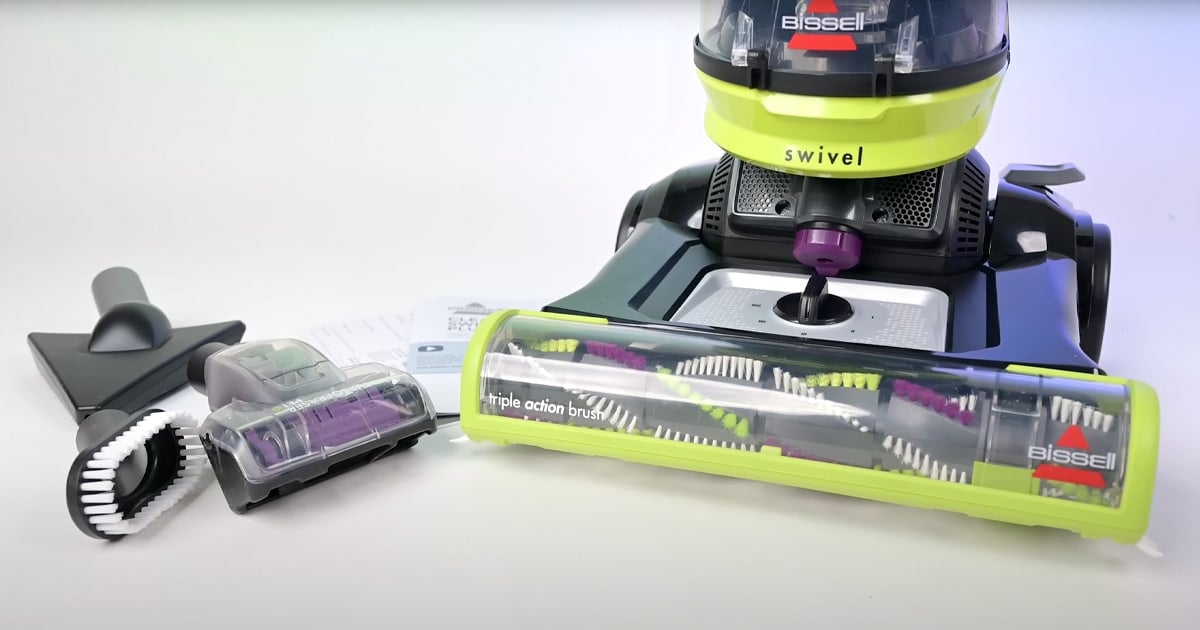 We finally got around to buying one and got to work answering the two questions that were front of mind. First, was the CleanView Swivel Pet’s ultra-low price the only reason this upright is so popular, or does it hold its own against other upright vacuums we have tested? Second, we wanted to see if there were any obvious problems with it and who, if anyone, should consider buying one.

When we got our CleanView Swivel Pet upright home, we cracked open the box. Inside we found the vacuum’s component parts, three accessories, and a manual. We assembled the vacuum, which only took a few minutes, and gave it a look over before we started to test its capabilities.

One of the biggest positives for the CleanView Swivel Pet upright is its price; it is really inexpensive. Compared with the Shark Stratos upright we recently reviewed, this Bissell upright is far less than half its price.

But with upright vacuums cheap doesn’t usually equal value. Up to this point, all of the upright vacuums we have tested in this price range have unfortunately been pretty awful.

This one, however, has really good reviews online. So its low price and high customer reviews are a strange combination.

After reviewing scores of vacuums over the years, we’ve become accustomed to being disappointed when testing low-price uprights. But we have to say that we were so impressed with the CleanView Swivel Pet’s results, that it made us rethink being such a snob when it comes to cheaper vacuums like these.

We tested the CleanView Swivel Pet in a number of ways, including measuring its suction at the hose, unsealed suction at the head, as well as airflow at both the hose and the head.

The results were about average. While that might not sound good, average is actually very good when you consider that the upright vacuums making up our average score are mostly double the Bissell’s price.

Where suction is concerned, one small feature that is a big deal is the small squeegee that Bissell added on the bottom of the vacuum, just after the brushroll. It helps the CleanView Swivel Pet make a better seal on hard floors.

This feature, combined with the upright’s suction, yielded really good results in our crevice pickup tests. Additionally, squeegees like this one are also crucial if you want to vacuum hard floors without scattering debris or turning the brushroll off.

In fact, one of the reasons we usually don’t like upright vacuums that are this cheap is that we cannot recommend them to people with hard floors. The reason is that they scatter debris, which is the opposite of what you want when you’re vacuuming.

Of course, every product has both positive and negative aspects. But when price goes down, the negative aspects usually increase in a dramatic fashion. That wasn’t the case with this Bissell upright.

The CleanView Swivel Pet did a good job on hard floors, picking up all sizes of debris without adjusting the vacuum height. This is pretty rare across vacuums we’ve tested. It also excelled at vacuuming up both heavy and fine debris. A few of the types of debris we tested this Bissell with were coffee grounds, cereal, and pet litter.

The Bissell CleanView Swivel Pet performed even better on carpets than it did on hard floors. It had the same great pickup ability, requiring even fewer height adjustments.

As far as our performance measurement on carpets is concerned, we also do a deep clean test. In this test, we embed sand deep into medium-pile carpet and see how much of it the vacuum can pick up. The CleanView Swivel Pet scored a perfect 100 on this test, which is above average when compared with all the uprights we have tested.

One area for improvement on many cheaper uprights is with their filtration, and the CleanView Swivel Pet’s filtration could use some improvement too. Well-designed sealed systems keep fine debris and particulates in the vacuum’s dustbin as opposed to returning them to the room being cleaned. Sealed HEPA filtration systems are the standard.

The CleanView Swivel Pet doesn’t have a sealed suction system, but being fair, we aren’t aware of another upright in this price range that does.

One of the reasons we think people like the Bissell CleanView Swivel Pet is that it has a lot of features that upright vacuums in this price range usually don’t have.

A more modern feature that makes a huge difference in usability in our opinion is a two-axis swivel. We can’t remember ever seeing a swivel like this on a vacuum that is so cheap, but the CleanView Swivel Pet does have it, and it does make a difference.

Another plus for the CleanView Swivel Pet is that it has a pretty decent attachment set that you would typically not see with an upright in this price range. Worth emphasizing is that Bissell included a powered handheld tool that is intended for upholstery or removing stubborn pet hair from furniture.

In our deep clean test the CleanView Swivel Pet scored a perfect 100, which is above average when compared with all the uprights we have tested.

Bissell calls its powered tool the Pet TurboEraser Tool. It isn’t as powerful as others we have tried, likely because the hose suction is so-so. Because it lacks that power, the brush can stop spinning if you apply too much pressure to it. But again, it’s surprising to find a powered attachment at all at this price.

There’s also a suction blockage indicator which we haven’t seen before but really like. It’s one of the more useful features that could be included on an upright vacuum. When you see the indicator change color from green to red, you can clean the filters or clear the blockage.

We also found the vacuum’s construction overall to be a strong point. In one test we measured the Bissell upright with an infrared camera just after starting it, then again after running it for 20 minutes. There weren’t any hotspots to speak of beyond the motor and belt, which are the areas we expected the heat to concentrate.

Both the Bissell CleanView Swivel Pet’s overall and handle weight came in at less than the average upright. That, combined with its two-axis swivel, makes it really easy to use.

It also has a fairly long hose at 6 feet, which seemed to be of good quality. It can be used in a variety of ways for above-floor cleaning jobs using the included accessories.

The vacuum’s cord was 27 feet long. That’s a bit lower than average, but not by much. Between that cord and the six feet of hose, the total reach is no less than 33 feet.

One thing to look out for is that the CleanView Swivel Pet’s vacuum head tends to tilt upward when vacuuming under furniture. It happens once the handle reaches a certain point as it is moved toward the ground. As a result, if the bottom of the vacuum isn’t in direct contact with the floor, it won’t be picking up any dirt or debris.

As you may have gathered, we found this Bissell upright to be an amazing budget upright vacuum that has a lot of value. There are many features that we usually don’t find on uprights in this price range. More importantly, the CleanView Swivel Pet proved itself to us, performing well on both hard floors and carpets.

After putting it through its paces, we now know why there are so many positive reviews for this vacuum. Of course, every product has both positive and negative aspects, and when price goes down, the negative aspects usually increase in a dramatic fashion. That, however, wasn’t the case with the Bissell CleanView Swivel Pet upright vacuum.

We think the Bissell CleanView Swivel Pet is a great budget upright vacuum.

We found this Bissell upright to be an amazing budget upright vacuum that has a lot of value. There are many features which we really don’t find on uprights in this price range. But, more importantly, the CleanView Swivel Pet proved itself, performing well when vacuuming on both hard floors and carpets. After putting it through its paces, we now know why there are so many positive reviews for the Bissell CleanView Swivel Pet online.

We think the Bissell CleanView Swivel Pet is a great budget upright vacuum.

The Bissell CleanView Swivel Pet is available online, including at the retailer(s) below.